A team won 5/6 national championships, won 198/228 maximum points. A team leading 15 points ahead of the opponent or being blown by the opponent to the back of the neck to the last round is still crowned. That team can be considered the greatest in the Premier League era.

Pep Guardiola has conquered all domestic titles with Man City, but success in Europe is still the stagnation of the Spanish strategist. Therefore, he will stay, determined to accomplish the unfinished goals.

It is true that Man City has spent a lot of money to build success but what makes you most impressed is that the players after being recruited to play better and to some extent, any player can be replaced. Of course, there are players who joined Man City as stars with proven talent like Sergio Aguero or Kevin de Bruyne. 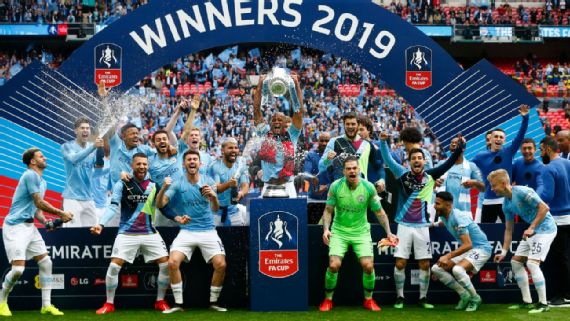 But the number of players after joining this team is better than they were before. David Silva is from Valencia when he was 24 years old but not well known, but he improved his image and improved his level when he arrived at Etihad.

Raheem Sterling is considered a young talent from Liverpool but has matured and perfected after arriving at Etihad. Fernandinho is still quite anonymous when playing in Ukraine until he was 28 years old and when he was 27, he first played for Brazil but then became City’s No.1 defensive midfielder, an important factor in Pep Guardiola’s lineup.

Aymeric Laporte until 23 years old was still not considered by the big teams but now is the pillar in defense City, an indispensable factor in the starting lineup of Pep Guardiola. Kyle Walker was 21 when he started playing at Tottenham.

Ederson before going to Etihad and becoming the No. 1 goalkeeper of Pep Guardiola had only one season in the Portuguese Premier League for Benfica. Then Bernardo Silva, Leroy Sane, Ilkay Guendogan, Zinchenko … all of them have no names that are widely covered, are inexperienced, lack of achievements until they join Man City.

The victories conquered with Etihad host team are the first big success for most of the stars. It is also impossible not to mention the remarkable role of Pep Guardiola in this success. Before Pep led Bayern Munich, the team won the Champions League and when it got there, Pep worked with many World Cup champions. Similarly, before Pep took charge, Barca also won the Champions League and Pep also worked with many World Cup champions there alongside Lionel Messi.

With his prestige, personality and talent, Guardiola has completely conquered City’s stars and helped this team dominate the Premier League in the last two seasons.