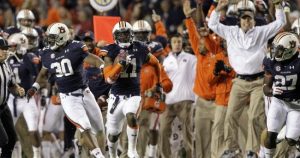 The football season brings life to some and happens to be a stranger to others. If you have never had a chance to get involved in this immersive sport, knowing a few rules might help you understand this American sport and improve the quality of your football conversations thus helping you enjoy the game better.

Each football game has four quarters lasting 15 minutes each, which implies that the entire gameplay lasts for an hour. There is also a 12-minute break to allow the team to strategize.

Each Team Can Only Field 11 Players

At any given moment, a team is allowed to field only 11 players. Each player plays a unique role. Defensively, you can have a cornerback, safeties, linebacker, defensive tackle, and the defensive end. On the offensive front, you will have a quarterback, a center, a running back, and a receiver.

There are four main ways to score in football. These include a touchdown, field goal, safety, and extra points worth six, three, two, and one or two points respectively.

What Happens When a Players Acts Otherwise?

When a player commits a foul, the whole team bears the burden. The punishment often depends on the severity of the foul. For instance, a minor foul by an offensive player might have the ball pushed back 10 yards, and if a defensive player fouls an attacker, the ball might be pushed 10 yards towards their end zone.

For bad fouls, when an official throws the yellow flag into the field, this is often indicative that there is a penalty. A penalty is often a direct opportunity to score points, which explains why players try as much as they can to avoid making fouls leading to a penalty.

Understanding the game is one of the most important steps to understanding football. This helps you follow the flow and also appreciate what the players are doing on the pitch.